Portal Bedroom Has Everything But Actual Portals

Animator/Father of the year/Aperture Science interior designer James Farr not only hooked up his son Vector Farr with the best name in the world, he also gave the kid a Portal-themed bedroom. It’s filled with Companion Cubes of different sizes, ensuring that Vector will have ample shields from turret fire and still have some left to solve puzzles. 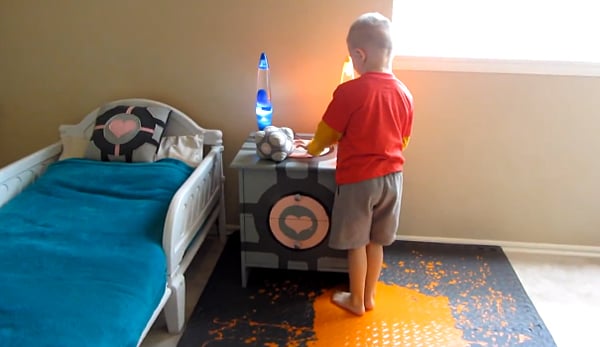 The blue and orange colors of portals also dominate the bedroom, and there are prints of the graffiti and signs from the game. I gotta say though, Vector is one brave kid. Watch the video to find out who’s watching over him every night:

He also has a Portal-potty:

I’d count myself the luckiest guy in the world if I had my room had its own bathroom, let alone a Portal-themed one. And seriously, Vector freakin’ Farr. That’s a name worthy of its own video game.