Batman Snuggie Blanket: for the Dork Knight in All of Us

You have the night off from fighting crime and you want nothing more than to kick back, relax and watch some TV. But it’s chilly. No worries. Just have Alfred fetch your Snuggie-style Batman Blanket with Sleeves and get nice and cozy. 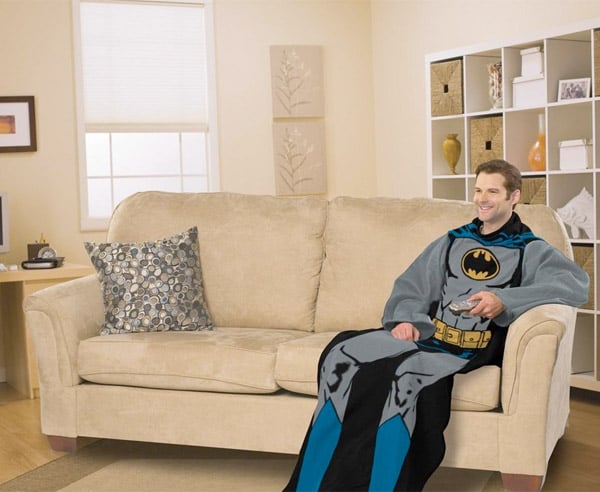 This adult sized Batman blanket is probably super warm and even has sleeves, so that you will always be ready to fight crime, even if all that involves is turning off some bad programming on the TV. Best blanket ever? Could be. Now all you need is a Catwoman version so that your wife or girlfriend can snuggle up with you.

Look at that guy in the pic. He thinks he’s alone in his home. He has no idea that we can see him looking all dorky. His wife probably left him, this being the last straw. He really should have stopped at the Batman undies. He’s probably watching Batman too. What a freak.

I’m ordering one, and you should too. It’s $27.90(USD) from Amazon. While you’re over there, let’s see what Spider-Man, Superman and Wonder Woman are up to on their days off.