Apple Founder’s Contract Signed by Jobs, the Woz, and Ronald Wayne to be Auctioned

This is really bizarre to me, but I bet some rich Apple geek will snap this right up. Apparently, the original contract from April 1, 1976 that established Apple Computer Corp. is hitting the auction block at Sotheby’s. The auction house expects the contract to go for some very big money. 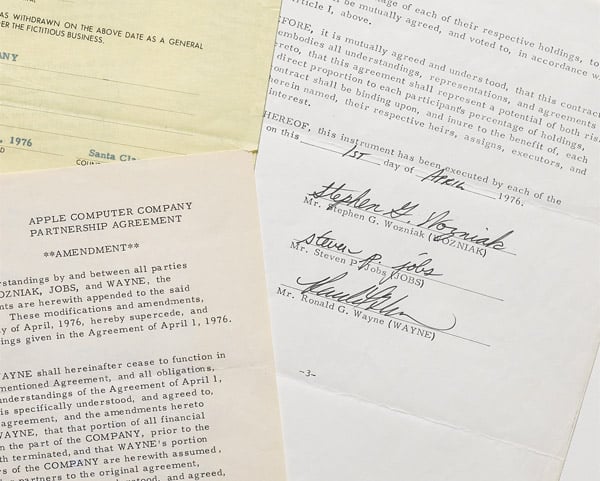 Apparently, the thought is the contract will fetch in the area of $100,000 to $150,000 (USD). The document will be auctioned as part of the Fine Books and Manuscripts auction on December 13, 2011 in NYC. Sotheby’s books and manuscripts head says that the document is a foundational document in terms of tech history. The contract has the signatures of Steve Jobs, Steve Wozniak, and Ronald Wayne.

Every time I hear the name of the third Apple founder, I feel sorry for him. Wayne gave up his shares of Apple for a mere $2,300 back in the day. The shares would be worth somewhere around $2.6 billion today. The document showing Wayne’s departure and the first $800 payment is included with the auction. He would later receive another $1500 when they converted Apple from a partnership to a corporation.