This Gumby-looking robot is the work of Harvard scientists, led by professor George M. Whitesides. It’s a flexible robot that can wiggle and worm through tight spaces. Like under your door, that tiny crack under your window pane, that bit of molding you’ve been meaning to fix – what the hell is that thing, and why is it spying on me? You would be forgiven for stomping it dead in it’s squirmy tracks since it has invaded your home and looks all creepy and worm-like. 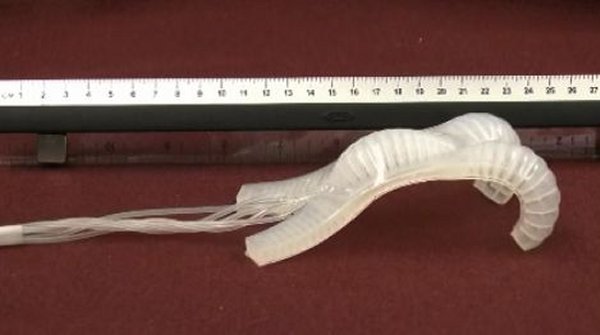 These Harvard braniacs studied squids, starfish and other animals that lack hard skeletons in order to come up with this specimen. It’s basically a four-legged rubber robot that looks like drunk Gumby at a party. This soft, yet elastic robot took two months to construct and is just 5 inches long. The four legs can be separately controlled by pumping air into them, either manually or through a computer. This allows it to crawl and slither and creep. It should prove very useful once they manage to get it untethered from the power source.

It could come in handy in any situation that requires getting into a tight space. Think the rubble after an earthquake or even difficult terrain. Then, of course there are the spy capabilities I mentioned, where it could slide under a door and gather intel.

Here’s a video of an earlier incarnation of the soft-bodied robot being used to gently grip an egg:

Hit the link to check out more details and an additional video.

[via Physorg and IEEE Spectrum]