As if there were any doubt that YouTube is the heavyweight champion of video streaming, here are some new numbers that will illustrate the point very effectively. According to comScore, in October 2011, YouTube accounted for 49.1% of all videos watched on the web in the US. That sure is a lot of cat videos.

It’s estimated that 42.6 billion videos were viewed online in the U.S. in October, with 20.9 billion served up by Google’s video juggernaut. VEVO took second place with 827 million, and Hulu came in third with 791 million. 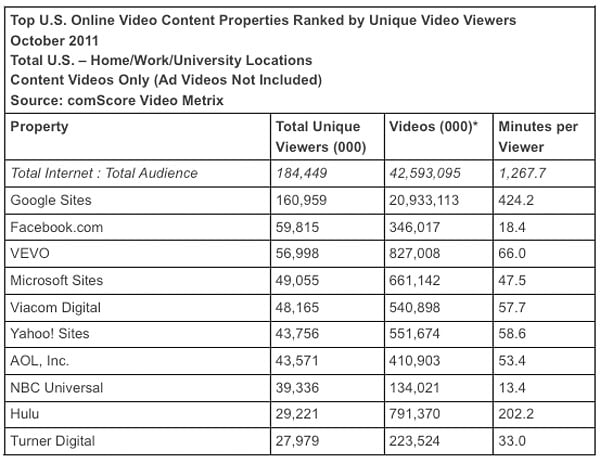 What about unique viewers who watched videos? You might expect Facebook to be the big winner, but no. Again YouTube took the lead, beating Facebook by triple with 161 million unique views, versus 59.8 million on Facebook. And the average amount of video viewed per person was a staggering 7 hours. Remember these stats are just for the U.S. The company’s overall stats are much higher.

[via Search Engine Land via geek]