Jetman Yves Rossy Flies in Formation: Danger Has No Meaning to This Guy

Yves Rossy, the flying Swiss maniac, has appropriately called himself Jetman, and I have to say that his moniker is well deserved, because that thing strapped to his back just looks plain dangerous. His latest stunt? Flying in formation with a pair of L-39C fighter jets. 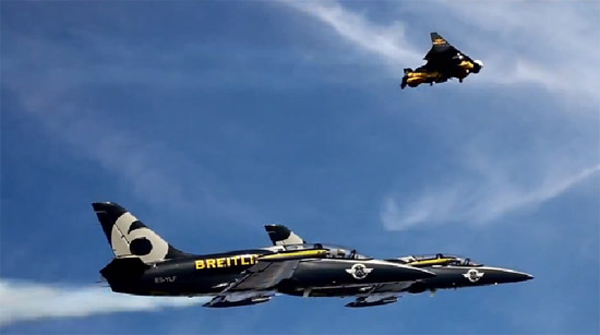 Yves Rossy has been working on his jet-powered wingsuit for a while, and after having added a carbon-fiber wing, with four miniature jet engines, he was able to join some jet aircrafts to fly in formation for a demonstration over the Swiss Alps.

Granted, the jets are flying just above stall speed, and the jetpack is going at full throttle (between 120 and 180 mph), but it’s still cool.