Robot Learns to Recognize Its Own Reflection, Has Great Grasp of Pronouns Too

After using the robot as a gesture-controlled music player, the makers of Qbo have set higher goals for their highly programmable robot. By equipping a Qbo unit with object recognition capabilities, they were able to teach it to recognize its own reflection. I hope no one teaches it to recognize humans as its enemies. 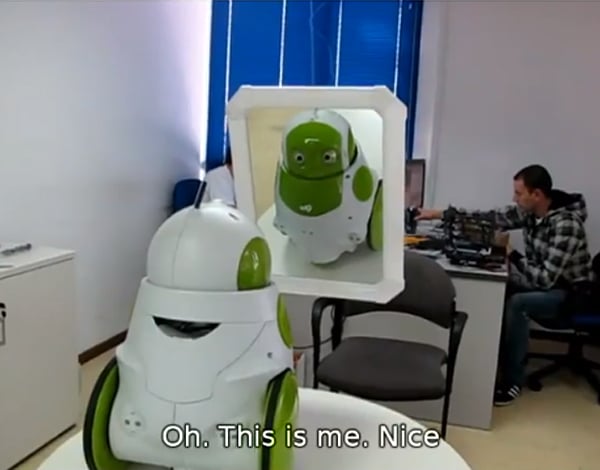 That subtitle was added by Qbo’s makers, but don’t be disappointed. The robot really does say that, among other things.

Amazing. It’s so amazing how a robot that announces everything it thinks and does is somehow adorable, but if a person does the same thing it’s considered annoying. I demand equal treatment! While I decide whether I should call for robots to be treated as badly as humans or humans to be coddled like robots, the folks at Thecorpora Robotic Company are working on making Qbo recognize its own image autonomously. They also left this teaser on their blog: “What would happen if a Qbo sees another Qbo in front of him? The answer will be out there pretty soon!” I predict that scenario will lead to a conversation of epic philosophical and grammatical importance.