Sony Makes Their Own Holodeck (with Projection Mapping)

Using a variety of visual tricks, including projection mapping, props, and motion-tracking, Sony managed to create some of the most mind-blowing visual illusions I’ve ever seen on video, bringing to life a sort of virtual “holodeck” for us to feast our eyes on. 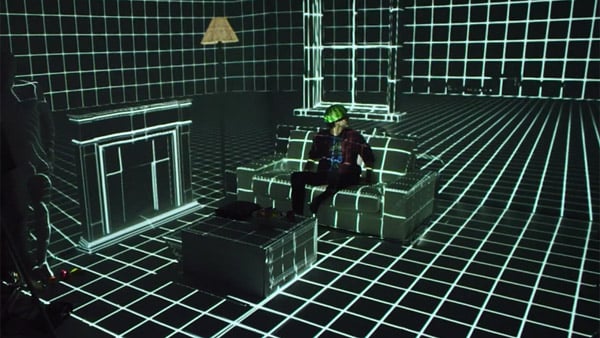 The series of three spots was produced on behalf of Sony Europe by Studio Output and Marshmallow Laser Feast to promote the immersiveness of movies rented or purchased from the PlayStation Store, and they definitely get the point across with these spectacular short clips. Incredibly, all three clips were shot in real-time, with zero edits or post-production. Everything you see was an optical effect seen through the lens of the camera. Michel Gondry would be proud. Watch, and see what I mean:

The scenes were created by projecting images onto various 3-dimensional surfaces, and then syncronized a variety of real-world props, booby traps, and triggers in the enviroment to move along with the scene changes. As you saw in the clips, live actors also helped move around various props and contrivances to help with the immersion. They shot the entire thing with a Steadicam, with several of PlayStation Move controllers strapped to it, as well as EyeToy cameras around the room in order automatically track motion and adjust the scene accordingly.

Now if only Sony could make a real holodeck, I’d buy one.