Musicians looking to add effects to their performances have a variety of ways they can do this – using dedicated “stomp boxes”, standalone effects processors, and even apps on their iPhone or iPad. This device will give musicians yet another way to produce effects, which integrates more naturally into their performance. 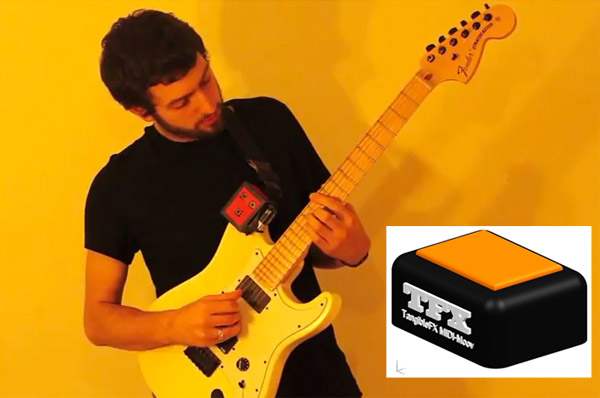 The MIDI-Moov is a new device from TangibleFX. Currently in the prototyping stages, it’s a small box you can attach to your body or musical instrument to detect motions and use them to control effects. The wireless device acts as a full MIDI controller, allowing you to attach an effect to each X, Y and Z axes of movement. So for instance, leaning forward or backwards could trigger an increase or decrease in the intensity of an effect or sound. The transmitter would then send these signals directly to a remote computer running software like Logic Pro, Cubase or Ableton Live to manipulate sounds in real time. Here’s a demo video of the current prototype in action:

Currently, the guys at TangibleFX are in the early stages of fundraising over on IndieGoGo for production of the MIDI-Moov, but haven’t really nailed down retail pricing for the gadget at this point. A $500 contribution will get you a handmade beta unit, but that seems like a whole lot of coin – especially on a musician’s budget. Still, the idea is cool, and I hope they figure out a way to get the costs down or to apply the same idea to an iOS or Android app at some point.