Comic books are cool. I love Batman, The Flash and all the rest, but personally I draw the line at Superhero undies. But if you want a case of comic book crotch, you’ll be happy to know that Diesel has unveiled a line of superhero themed boxer briefs. 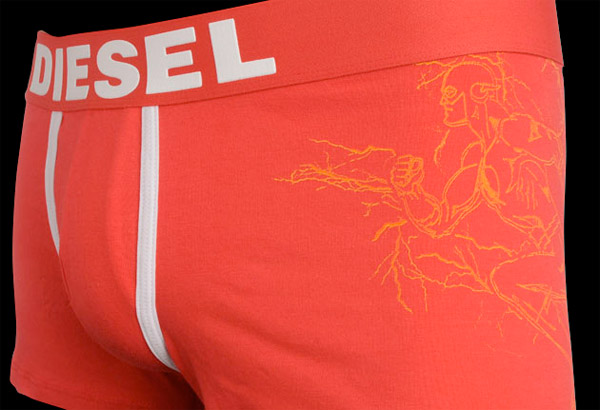 These boxers are all based on DC Comics characters. You can get Batman, Green Lantern and The Flash themed undies, as well as The Joker – but he’s not a superhero, so what is he doing in your underwear? They won’t give you super-powers, they will just make you feel like they do. Unless, that is, you consider light or temperature-sensitive prints that only show up under your own body heat, or designs that reveal themselves after time to be super-powers.

The Flash version is probably the coolest, since you don’t want those tacky Joker colors on your junk and also probably don’t want a Batsignal tramp stamp behind you. You can check them all out here. It looks like they will cost you $34(USD) a pair and some shameful looks from your girlfriend. Girlfriend. That’s funny.