QuNeo Multitouch Controller Looks Like a Game-Changer for Electronic Music

Electronic musicians and DJs, here’s something you guys will probably love. It’s a new MIDI/USB controller which looks pretty spectactular, especially when you consider the relatively low price, which starts at just 200 bucks. 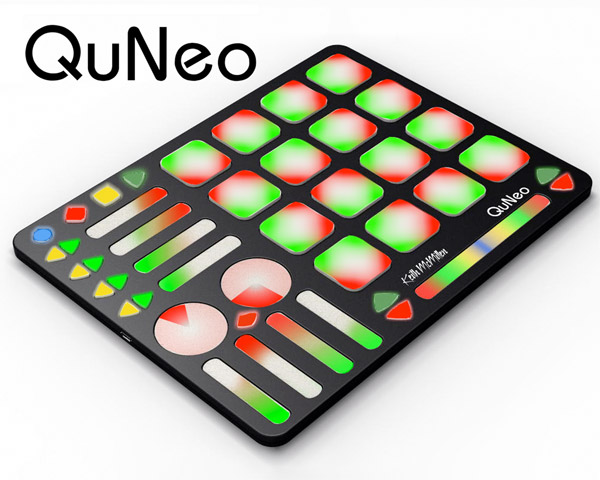 The QuNeo is a multitouch controller, designed by Keith McMillen Instruments, who has been a pioneer in the electronic music world for over 30 years, so this isn’t just some fly-by-night project either. The controller is loaded with input methods, including 16 square pads, 2 rotary sensors, 9 sliders, and 17 switches. But the really cool thing is that the pads are capable of sensing velocity and position of your fingertips. The square triggers sense 127 levels of velocity, X/Y location, and pressure. Each rotary sensor can detect angle, pressure and distance from its center. The sliders support multitouch, so you can set a bottom and top range. This means that each input trigger can provide an insane amount of nuance and creative control.

Underneath the pads are 251 individual multi-color LEDs, which can provide visual feedback as you play. It’s compatible with MIDI, USB and OSC protocols, and can be used with popular music software like Ableton Live. Plus, there’s an open source SDK for the QuNeo, so you can use its sensor date to control just about anything you want – heck, you could even use it as a game or a robotics controller if you’re clever with software development.

Another cool thing is that they designed it to be the same dimensions as an iPad 2, so many iPad stands and mounts work to hold it. And while you might wonder if you could do the same thing on the screen on an iPad itself, there’s still nothing better than actual tactile feedback when playing an instrument. Just like typing on a touchscreen, playing music on one isn’t the most natural thing to do.

The QuNeo is currently raising funds over on Kickstarter to ramp up production, and has already blown through its initial $15,000 goal by over 400%. So it’s definitely being funded. A pledge of $200(USD) will get you one of the first QuNeo controllers, and $240 will get you a QuNeo along with a MIDI expander box if you need to connect it to 5-pin MIDI DIN inputs.