You know, there might be a day sometime in my life where robots performing mundane tasks will no longer be a novelty, and they’ll just be part of our everyday lives. But until that day, I’m still going to find things like robots popping popcorn and making sandwiches to be at least mildly amusing. 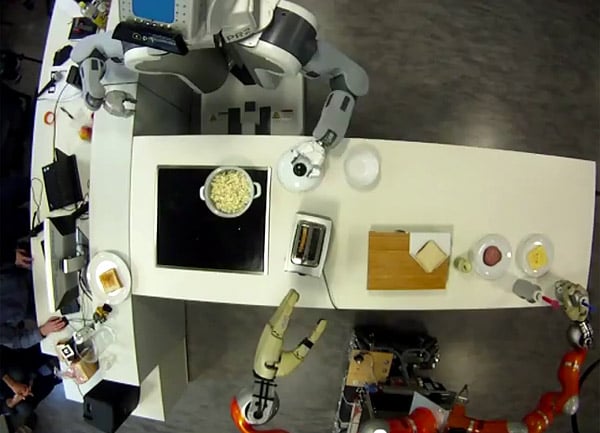 You might recall a while back that we featured robots TUM-James and TUM-Rosie cooking up some breakfast sausages and baguettes. Now, the robotic duo from the Technical University in Munich are back, with snack foods and lunch on the menu this time. James cooks his popcorn on the stovetop using a pot and hot cooking oil, and inspired by this xkcd comic, Rosie does her best to compose a salami and cheese sandwich on toast (with mayo.) Not that he quite gets how to use a toaster. Here’s a video clip showing of the ‘bots prepping some grub for onlookers:

You’ll notice that video was sped up by a 10x factor, as it apparently takes the robots a bit more time to perform their cooking tasks than we humans have the patience to watch. That said, here’s a version at normal speed which explains a bit more about what James and Rosie are up to in the kitchen:

Wow, there sure is a lot for those robots to think about. Makes our puny human brains seem so much more impressive. I love how Rosie has to stab the cheese and bread with a fork to make her sammie. If I had my own robot servant, I think I’d just have him put a bag of Orville Redenbacher’s in the microwave and press the “Popcorn” button, then send him out to Subway for sandwiches.