The following post is from Technabob guest writer Jack Kieffer of Cool Gizmo Toys, a site that loves geeky products as well as Pandas. The site isn’t about Pandas, but those are pretty awesome anyway.

Diehard Doctor Who fans would recognize the Cybermat immediately, and would be super excited to hear that the Bump-N-Go Cybermat is available this Christmas season! For $45, you get the 6 inch-long Cybermat replica that autonomously roams your floors. By autonomously, I mean that every time it smacks its face into something, it turns around. Which, for $45, is probably the best level of autonomous available. Even some small children don’t have that plateau of intelligence! *Small child runs his face into a pole. Small child backs up. Small child runs his face into the pole again. Small child sits down and cries.* 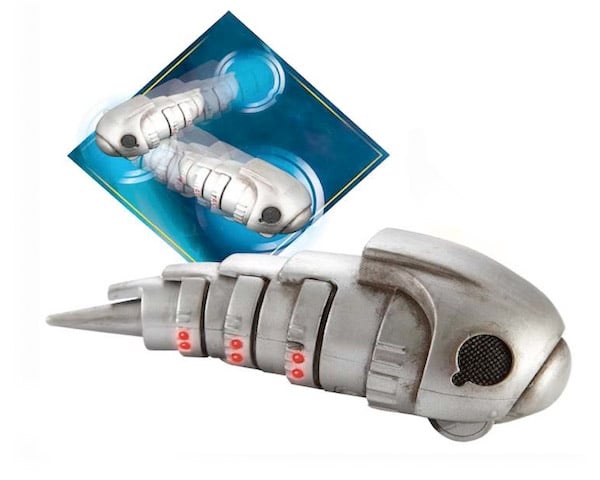 The Bump-N-Go Cybermat is from Series 6 Episode 12 of Doctor Who, and it has some crazy awesome tail swishing action that doesn’t actually affect its movement but does affect its price because it is way cooler when it swishes its tail. Plus, an extra motor is needed, thus the production price is increased. The Bump-N-Go Cybermat is complete with red LEDs on its side, but is incomplete since its mouth is not revealed. You don’t get to see it in the episode, you don’t get to see it in the toy. This is probably just because anything the designers came up with would disappoint – the hype is too much for the Atlas of the Doctor Who World to carry. That’s why said Atlas will hand it off to some unwitting Hercules figure who will end up holding it for a very long time before the unwitting Hercules is able to wit said Atlas back into holding up the world. Couple of screwball knuckleheads – it’s best just to avoid the situation entirely and save ourselves a massive headache.

Like I said, the Bump-N-Go Cybermats are $45 per, and are available from Neatoshop for your buying delight! If you’re looking for more Doctor Who goodness, I’d recommend you check out the Doctor Who Chess Set and the teaser for the new Doctor Who PS3 game.