Green Footprint Concept Could Save Lives, or Just Be the Latest Blue Man Group Routine

I can’t think of many worse places to be stuck than in the smoke-filled interior of a building on fire. Between the prospects of suffocating from smoke inhalation, and burning to death, it’s not a pretty thought. This intriguing concept aims to increase the chances that firefighters will find people before they become casualties.

The idea behind Green Footprint is simple. When a fire is detected, a special ceiling fixture releases a glowing flourescent liquid into hallways and offices. As people move around the room, the dye leaves a trail of glowing footprints wherever they walked. In theory, this would lead firefighters to see exactly where people made their exit or if they were trapped along the way. 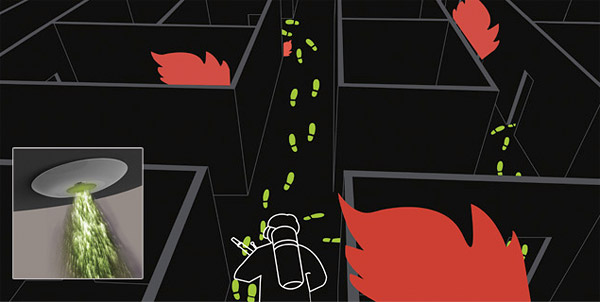 If you’re wondering how the stuff would glow – the fixture would actually have lights inside of it, charging up the glow-in-the-dark goo all day long until a fire comes along and triggers a temperature sensor.

I know there are already fancy infrared cameras which let firefighters see the heat signatures of humans (and flames), but this seems like a nice low-tech solution which could definitely save lives – assuming that you can actually see the glowy footprints through the smoke.

Green Footprint was an entrant (and winner) of a Red Dot design concept award, and was conceptualized by Chen Hongyu, Tang Ruoqing, Wang Sheng, Zhu Baixuan and Bian Jing.