If you’re like me, you’ve gotten in the habit of taking your iPad to bed, and using it to read, surf the web and play games. One of the most annoying things about the iPad in bed is trying to use it while you’re lying down. I’ve tried propping my iPad 2 up on a pillow, and on its Smart Cover, but it inevitably falls over or has me craning my neck at a weird angle. So if you’re looking for a solution for using your iPad 2 in bed (or on any other uneven surface), you might want to check out the Cushpad.

The Cushpad provides a soft and squishy resting place for your iPad 2, whether in bed, on your lap while on the couch, or on a table. It’s a simple idea – a trapezoidal pillow, covered with a satiny fabric, and a couple of small pillow-like grips to hold the iPad in place. Just slide your iPad into the soft ledges of the Cushpad, and it holds it nicely in place. It works in both landscape or portrait orientations, and smartly offers two different angles for horizontal usage. There’s also a handle on the back for easily carrying it around, but I wouldn’t feel comfortable doing that with the iPad in place. 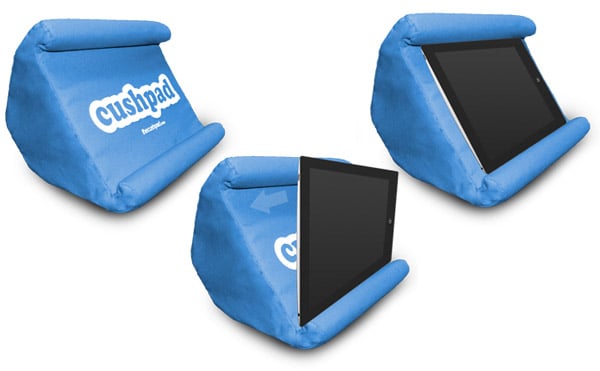 I recently got a chance to try a Cushpad with my iPad 2, and it really is helpful for viewing movies and playing games while lying in bed and hanging out on the sofa. I could also see it coming in handy on your lap while on an airplane or long train or bus trip. About the only thing I didn’t care for was that you really need to remove the Smart Cover in order for it to hold your iPad – although for quick usage, I figured out that you can set the iPad into the bottom ledge and flip the Smart Cover over the top of the Cushpad too. It’s just not as solid and stable as if you remove the cover and use both ledges. Still, it’s a minor complaint about an otherwise very handy little invention. 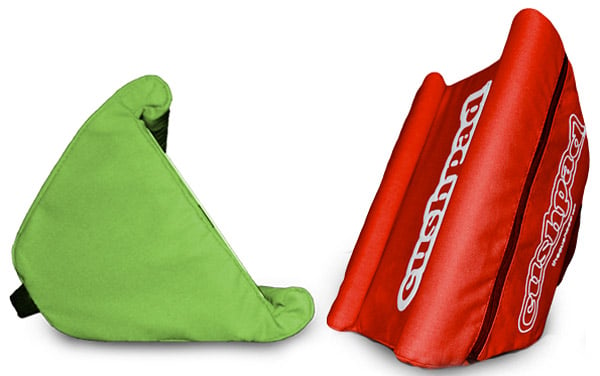 The Cushpad is available in green, blue, red, grey or black fabric, and the cover comes off for easy washing too. It sells for $34.99 (USD), but they’re offering an extra $5 discount if you “like” them over on Facebook first. 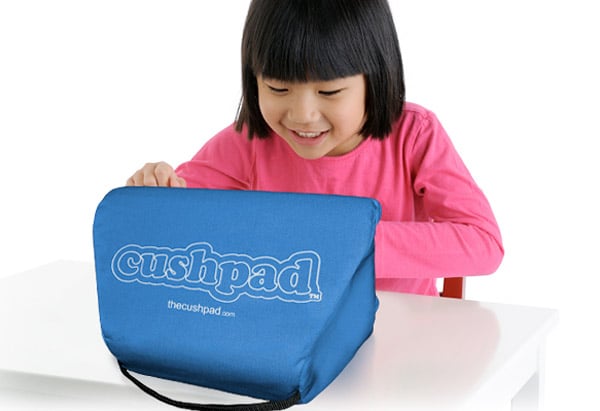