This may not be on the scale of Real Steel (or even Battlebots) but watching robots of any size duke it out is pretty fun. A “Robot Pro Wrestling event” was recently held in Japan on Christmas day at the Buddhist Hall in Tsukiji, Tokyo and the result is Rock ’em Sock ’em robots for real. 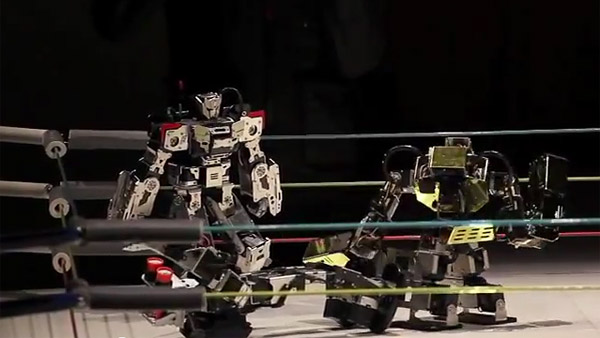 The two robot fighters shown here are Nagare Gold and Thunderbolt. The other one is the referee. Unlike real(fake) wrestling, no robot was thrown into the crowd, no one hit the other with a folded metal chair and Captain Lou Albano was not present.

I love how the robot ref gets down on his knees and gives the count when a ‘bot goes down and gets pinned to the mat. If you had money on this match, I hope you picked Thunderbolt, because around the 5:50 mark in the video, he totally hands Nagare Gold his shiny metal ass.