Back in 2008 Flaming Lips’ frontman Wayne Coyne hacked a custom guitar together using parts from a Guitar Hero controller. Pretty impressive, but chiptune artist cTrix had a bolder idea – he used a whole console. Yeah, yeah, but this one doesn’t look stupid at all. Behold: the gAtari 2600. 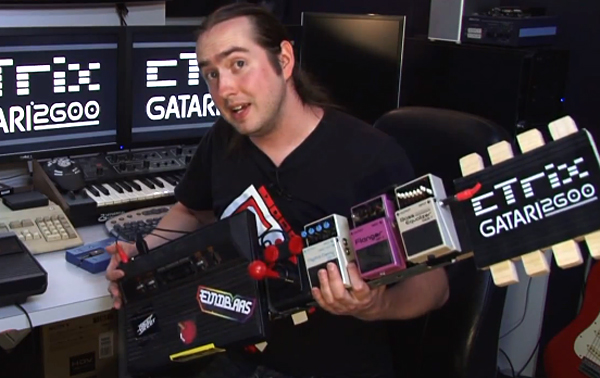 Granted, this gargantuan device isn’t really a guitar – the head stock is totally decorative – but dammit he’s carrying a whole console and three effects pedals. That’s a recipe for back problems. The gAtari 2600 also has a track switcher in the form of a joystick, although not in the form of the console’s iconic controller. Watch the video below to see cTrix lug the gAtari 2600 around while rocking out.

What an unbelievably crazy idea. I’m sure he could have taken out the console’s parts and ended up with a smaller instrument, but no, he just went for it. Somehow I can’t imagine a PS3 or Xbox 360 guitar looking as cool as this. Check out cTrix’ website for more of his gadgets and music.