The world has gone hybrid crazy it seems. The hybrid makes a lot of sense in that you can reduce the amount of fuel you use and save a bit at the pump. They also make less pollution we all have to breathe as well. Hybrid tech has even found its way into some sports cars and it is now making its way to military vehicles too. 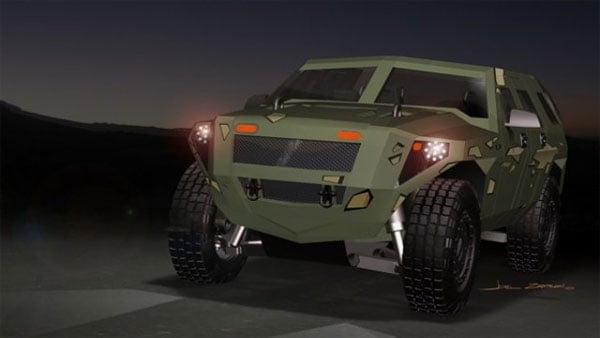 The giant vehicles that the military uses are far from fuel-efficient and the more fuel they consume, the more fuel the military has to transport to wherever they are operating from. The more transportation runs to fuel up, the more soldiers are in harm’s way. Never mind the massive fuel expenses passed onto taxpayers. Clearly, saving fuel has many benefits in the military. This is why the Hummer is gong hybrid.

The full details on the vehicle known as the Fuel Efficiency Group Vehicle Demonstrator or FED Bravo are still classified. However, it is said to be a plug-in hybrid, using technology similar to the Chevy Volt. More details are known about the FED Alpha, a lightweight model which uses a solar panel to power its electrical system, and runs on a turbo 4-cylinder diesel engine, along with special tires which have a low rolling resistance. The vehicles are said to get the same performance as current Hummers and save 70% on fuel.

[via Inhabitat via Jalopnik]