Scientists Tickle Gorillas on Quest for Origins of Laughter

Scientists are searching for the reasons why humans laugh, and are studying all sort of animals to figure out if other species laugh as well. It’s easy to imagine that gorillas and other monkeys would laugh when tickled, since they are some of the animals closest to humans. One zookeeper says that his gorilla, Emmie, laughs when you tickle her and he says that gorillas tickle each other as well. 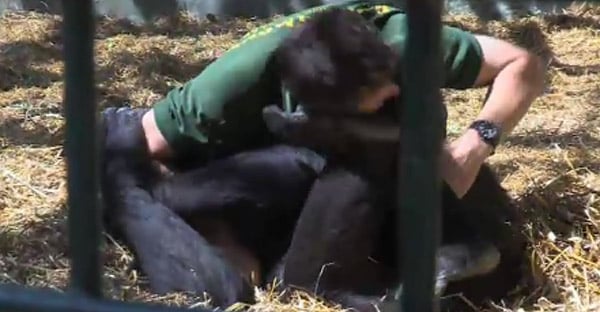 Rather than using their hands though, the gorillas tend to use their teeth apparently. I wouldn’t want to be tickled by a gorilla’s teeth. Apparently, when Emmie is in the mood to play she will make a sound that is a lot like human laughter when tickled. According to researchers, many animals will make specific sounds when tickled including rats and some birds.

The researchers are looking at videos online using YouTube and other sites to find what animals do when tickled. Would you tickle a gorilla or other great ape? Those animals can kill a human easily and some even been known to eat people. I’ll pass, thank you.