Our pal Joerg Sprave is one spooky dude with all sorts of slingshots around that will fend off a zombie invasion without bullets. Joerg is back this time out with a new slingshot that he designed specifically for the zombie apocalypse. This one shoots regular metal balls, rather than saw blades like some of the other devices he had made. 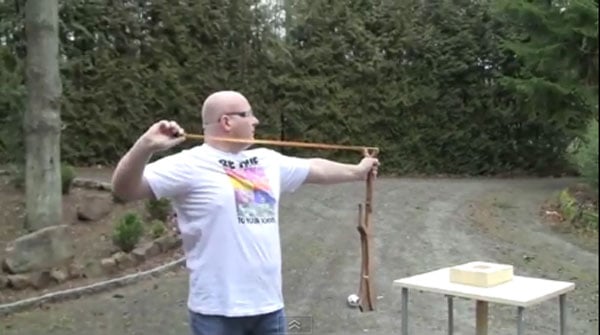 One end of the new Zombiehammer slingshot is your typical slingshot that is powerful and shoots metal ball bearings. The other end of the slingshot is where the zombie smashing magic happens. Joerg built a giant spike into one side and a massive ball on the other. So it’s both a projectile and a melee weapon in one.

The spike even has an ejector so if you spike a zombie and the spike sticks, you can pull the elector lever and pop the undead skull off your spike. Take Joerg’s words to heart, he would never use this thing on a human, only a Zombie.