This amazing-looking hologram-like display is made out of a two-dimensional image that’s projected onto a curtain of water vapor. The whole thing looks incredible, and quite realistic. I guess that Leia should have been pleading for DIY-Kenobi instead of Obi-Wan. 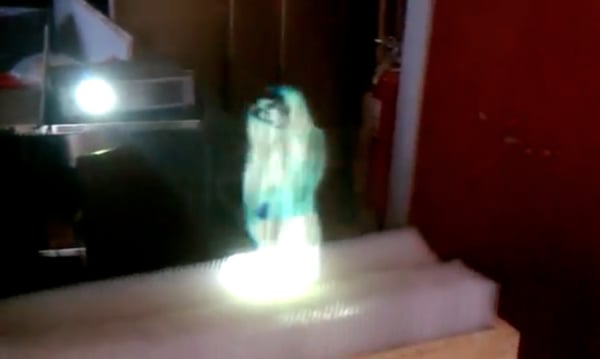 It’s the work of Chris Weibert, who’s also known as ChristopherTalosian on YouTube. The whole thing was jury-rigged together using everyday items. The water vapor is produced by an ultrasonic humidifier that’s been hacked onto a laminar flow nozzle, which in turn is made out of a bunch of drinking straws. Now that’s a cool use of straws. The humidifier came from a thrift store, while the fans came from computers.

The thin, even sheet of vapor mist is able to catch light projected onto it from the rear, giving it an effect not dissimilar from the original projected Leia in A New Hope. Now he just needs to build the projector into an R2-D2 robot and it’ll be perfect.

[via Mike Senese via Make:]