The web has been buzzing about this wonder device for a while now, but I think it’s still worth sharing here on our blog because it will allow you to replicate some of the hacks that we’ve featured. So what is Twine, and what does it do? In a nutshell, Twine is an newbie-friendly middleman (middlebox?) that will let inanimate objects communicate with you. 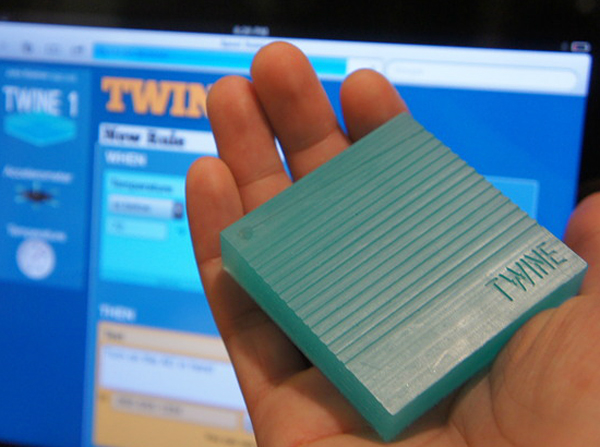 How will Twine make objects talk? There are two crucial elements. First, the sensors – aside from the Wi-Fi module that it uses to communicate, there is a vibration sensor and temperature sensor inside the 2.5″ module. Its maker, Supermechanical also has additional sensors in the works, such as a magnetic switch (for detecting moving objects) and a moisture sensor. 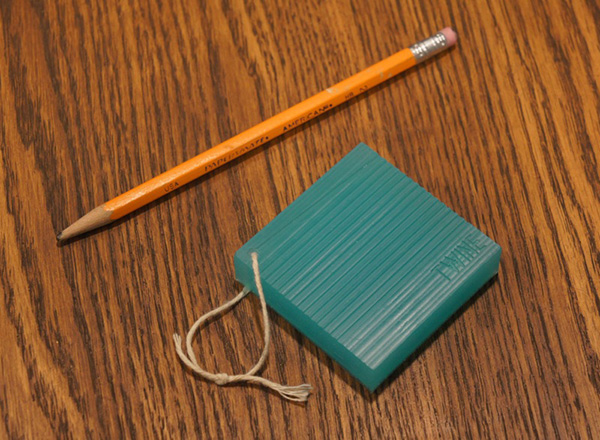 The sensors are important – this means that you don’t have to cut wires, solder or even mess with a circuit board to set up a project. For example, in the video below the module is shown on top of a washing machine, presumably to detect when the machine starts or stops. Or you can just leave it in a room to detect temperature changes. Dead simple. 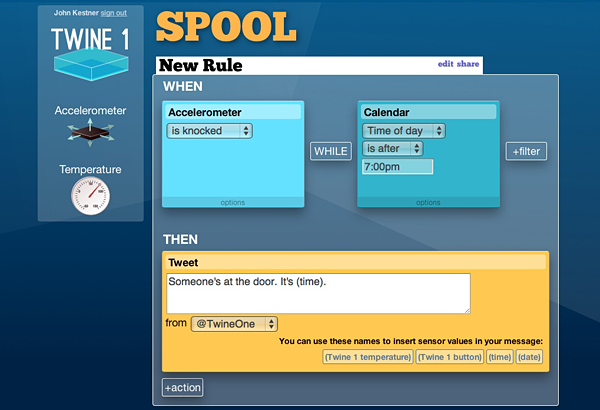 The second crucial element is Spool, Twine’s complementary web app. It lets you set up simple “when x, then y” conditions. It’s programming in plain English, with four possible outputs – a text message, a tweet, an email or an HTTP request. So for instance, continuing our previous example, you can set up a system wherein you’ll receive a text when your washing machine is done.

You can also set up added conditions, which Spool calls filters, turning your condition into “when x while y then z.” But Twine is not just for newbies. It has additional options for more advanced tinkerers, such as support for a breakout board. Inventors David Carr and John Kestner talk more about Twine below:

Head to Supermechanical’s website to pre-order Twine. Prices start at $99 (USD). If you think that Twine will only let your gadgets talk, take a minute to look at the Harry Potter clock, the Siri Beer Bot and the Siri home automation hack. All three involve detecting either a text or Twitter message – things that Twine produces – which is then used as a signal to activate additional hardware. That’s just off the top off my head.

So really, the possibilities are endless with Twine. At the very least, it’s a great gateway to the wonderful world of hardware tinkering. It’s no wonder that Supermechanical raised more than half a million dollars on Kickstarter despite their modest goal of $35,000.