if you like to sketch on your iPad, you know there are a bunch of styluses on the market and coming out which try to improve upon the drawing and painting experience in apps like ArtRage. The issue is that because of the iPad’s capacitive screen, it’s difficult to detect a fine point, and unlike a Wacom tablet, it’s not pressure sensitive. This stylus with a funny sounding name aims to change that. 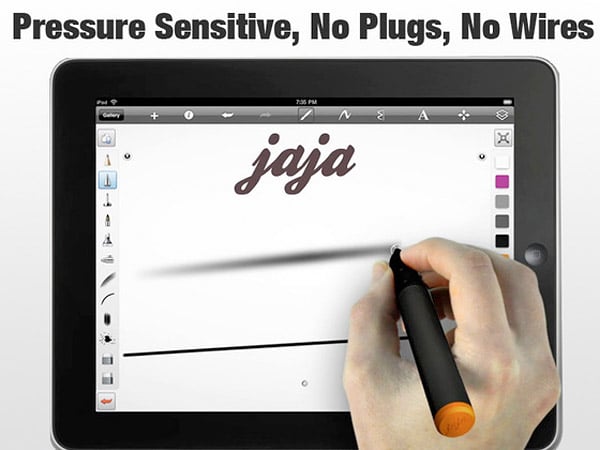 While the jaja doesn’t have the ultra-precise pointing capability of the recently announced iPen, it does do one thing that artists have dreamed they could do on their tablets – detect stroke pressure. Two buttons on the stylus also can be used to switch colors, erase, or other custom functions.

Created by Jon Atherton of Silicon Spark, the jaja stylus works its magic using a clever, but simple sounding trick. As you press down, high frequency sounds are emitted by the pen. The variable frequency sound – undetectable by human ears – is picked up by the tablet’s microphone, and converted into pressure information. By building this trick into the pen itself, it requires no add-ons, and the pressure conversion can be handled by algorithms in the software. It even means it’ll work with any tablet with a microphone with the proper app installed, of course.

I like how he calls it a “Zsa Zsa”. I think I’ll call it that instead.

My only concern about the concept is what if any impact background noises (like flying on an airplane or taking a train) might have on the technology, and if multiple people in the same room could even use jaja pens without causing interference. I’m also not thrilled with the design of the pen itself, as it uses one of those cumbersome clear disc tips at the end. This lets you see exactly where you’re drawing, but doesn’t exactly feel like a normal pen based on my experience with other styli built the same way. Still, the pressure sensitivity – if it works well – is more than worth the price of admission.

If you’re interested in trying out the jaja stylus for yourself, head on over to Kickstarter and pledge now. The first 500 people can get a single jaja for just $40 (retail price will be $69). The project is looking to raise $25,000 total by February 7th, and is already about 1/3rd of the way there as of this writing. They expect to ship their first batch sometime this April. Atherton also plans on releasing an SDK to development partners so more apps can leverage the technology.

I’m hoping they’ll someday get together with the iPen guys and join forces to create a single stylus which can draw with precision AND is pressure sensitive. That would be the holy grail for tablet-bound artists. There’s no techincal reason I can think of that the two ideas couldn’t be combined.