To build a better robot, researchers from the University of California, Berkeley are adding lizard-like tails. They have created a new kind of robot inspired by lizards. Leaping lizards use their tails to control the orientation of their bodies when leaping through the air, and that’s what the new design is all about. 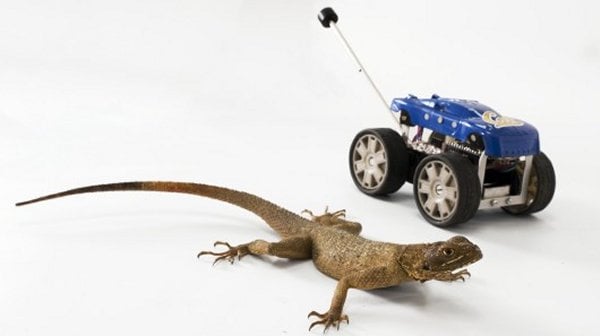 The video shows how both the lizards and the robot are able to control their body orientation with the tail. The researchers came up with a mathematical model to determine how much tail swing would be necessary to compensate for various amounts of angular momentum of the body.

And so the Tailbot was born. It’s basically a small radio-controlled car with a motor-controlled tail, and a gyroscopic sensor that replicates the leaping lizards’ control. It’s a fascinating video, so make sure you check it out. I wonder if this would work for humans. Maybe someone can create a special suit with a tail that will help them leap around like a lizard. Someone, get on that!