MakerBot Replicator: Out of Star Trek into Your Own Garage!

I’ve always been a fan of 3D printers, especially when nowadays you can have one in your garage or basement and just print away. Bre Pettis has unveiled the latest edition of the MakerBot 3D printer. It’s called the Replicator and includes a host of improvements, which will allow you to replicate almost anything you can imagine. 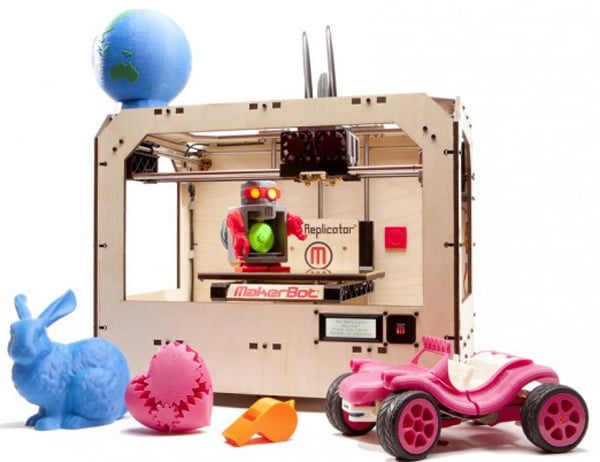 The improvements include dual extruders and the interface controller. Each MakerBot Replicator now comes with an LCD and video-game-style control pad. The LCD screen allows you to view build statistics and monitor information as well as full control of the machine without the use of plugging in a computer. There’s an SD card slot and you can load models directly. It’s also larger than the original, allowing you to output bigger models (up to 9″ x 6″ x 6″ – about the size of a loaf of bread).

The whole thing is sold as a complete product, not a kit, allowing people who are less technologically savvy to get going right away. The MakerBot Replicator sells for $1,749 for the single extruder model and $1,999 for the dual extruder (for 2-color printing) over at the MakerBot store. They expect to start shipping in about six weeks.