Philips Desktop Microphone: Looks Like a UFO or a Frisbee

If you ever have the need to record what people are saying in a conference room, here’s a cool looking microphone which might help you capture better quality sound than you might get from traditional microphones.

This unobtrusive desktop mic from Philips was designed by GP Designpartners. It’s designed specifically to be used for recording meetings and conferences, but can also be used as a microphone for phone conferences if your phone system can accept an external mic. 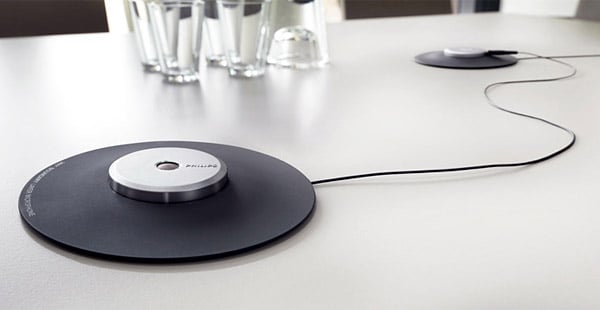 The slightly-sloped disk has been designed to guide sound waves bouncing off of the table into the mic, and it can capture audio in a full 360-degree circle around the table. The mic’s bottom surface has been rubberized, so it will stay in place. There is also an integrated cable management system underneath it, so excess cable can be neatly tucked away.

All in all, if you need a desktop mic and don’t want anything too big, then this might be the way to go. You can get your hands on one over at Amazon for $145 (USD).