When it comes to road trips, any parent can tell you a few hours spent in a car with a couple kids can feel like days. Kids get bored and cranky after a while, leading to cranky parents. Now, GM is showing a cool concept that takes the windows of the car and turns them them interactive surfaces to keep the young ones (and other passengers) occupied. 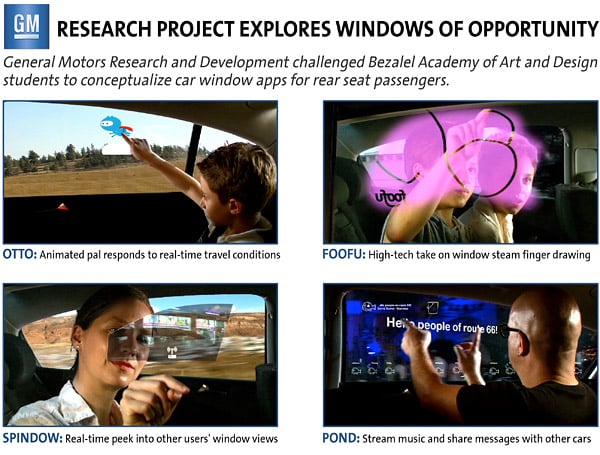 The idea is that the windows would be transparent screens which could display all sorts of content from game apps for kids to navigation details for the driver or passenger. I really like the idea of navigation content being projected onto the windshield. That way you don’t need to take your eyes off the road for directions.

The apps for kids though are the ones that will likely get the most attention. The prototype apps let kids finger paint, and interact with characters who react to the speed of the vehicle. For the big kids, there are apps for navigation as well as streaming music and social networking.

GM notes that it has no current plans to use the window tech in a production vehicle, and there is no indication when this tech will leave concept and come to the real world. Hopefully it’s not that far off.