Floyd Davis IV makes Gentleman’s Boomboxes – sound systems out of old suitcases and other types of luggage. If the idea sounds familiar, it’s because there’s something exactly like it – though Davis claims that the idea was stolen from him. Oooooh, intrigue. You’d think that he’d be more protective with his ideas because of what happened, but Davis just did the opposite. He went on Craftsman’s web show and demonstrated his build process. But instead of using luggage, Davis built a boombox out of a toolbox. 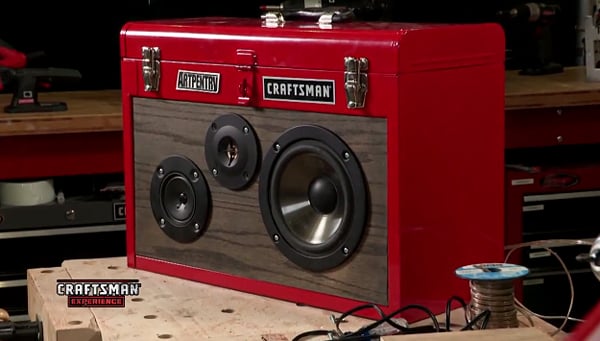 The boombox is powered by a Pyle Pro stereo amplifier. I could be going deaf, but I’m pretty sure Davis said the amp’s model was “PNA4”, a model that I am certain – based on my exhaustive 5-second research – does not exist. There is a Pyle Pro PTA4 stereo amp though. Bottom line, there’s a stereo amp inside. Davis then used second hand speakers that he got from a thrift shop and some plywood for the front panel. Watch the video below for the full build and some witty banter:

So what are you waiting for? Go grab your stuff, tools, things and ideas and make your own toolbox boombox. Check out Floyd’s website if you want to see his Gentleman’s Boomboxes. As far as I know, he doesn’t have an online store for his products, so if you want to order or commission your own boombox your best bet is to contact him. I bet you’ll have a fun conversation.