I’ve previously featured some pretty ridiculously large NES controllers here on the site, but this one is the new supersize champ, measuring approximately 30 times the size of an original NES gamepad. 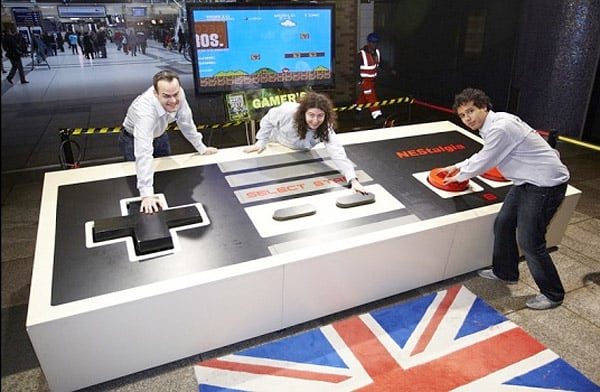 The massive controller measures approximately 12ft (w) x 5 ft (d) 3 in x 1ft 8 in (h), and weighs in at a whopping 265 pounds. It was built by Ben Allen, along with Stephen van ‘t Hof and Michel Verhulst.

The controller cost over $6,000 (USD) to construct, and yes – it does play games. The thing is so big that it takes at least two people to play a game with it, as the armspan required to use the D-Pad at the same time as the A/B buttons is too wide for even the likes of Yao Ming. Hence, my comment about Co-Op mode in the title above.

The controller was shown off at London, England’s Liverpool Street Station in celebration of the release of Guiness World Records Gamer’s Edition 2012. And no, you can’t have it in your living room.