The older some people get, the more self-conscious they become. For example, the other day, I bumped into my aunt at the mall. Before I knew it, the conversation had somehow steered on to how her skin was starting to sag and how wrinkly her chin was – both of which were topics that I was not even remotely interested in. (But of course, I didn’t tell her that.) 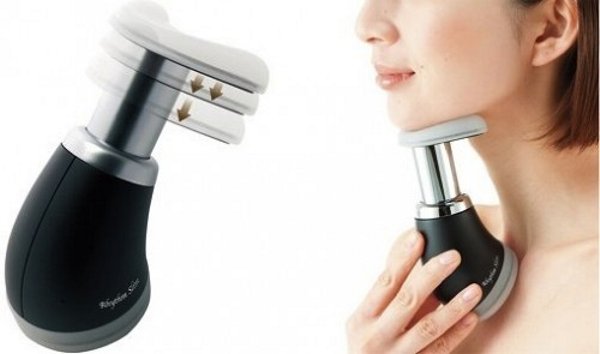 I just wish I had seen the Rhythm Slim Chin Exerciser gadget before I met her, so I could’ve at least said something aside from repeating “Yeah, I understand” and “No, I don’t think it looks that bad at all!” throughout the entire conversation.

So where in the world can you get a nifty little gadget that promises to exercise your neck and jaw muscles to ease cramps, fight off wrinkles, and prevent sagging skin? From Japan. But for everyone else who lives elsewhere, then you can get it from the Japan Trend Shop.

Basically, you just position the exerciser under your chin and push down. Hold that position for ten seconds if you can, release, then repeat the entire thing for at least three minutes each day.

I don’t know if this is a proven thing, but it sure beats having to go get some plastic surgery if you really care that much about a wrinkly-looking chin. It sells for $136 (USD), which is a whole lot less than what you’d normally have to shell out if you were going to get some surgery done as well – but probably a whole lot more than you’d pay for it if you lived in Japan.