Skinless Robot Baby is the Stuff Nightmares are Made of

Babies are a huge responsibility. Every parent knows that, whether they still have one on the way or already have several kids in tow.

To prepare for parenthood, some parents-to-be get one of those baby dolls and take care of it with their partner as if it were a real baby. Some couples opt to do the egg experiment, where they care for an egg instead of the doll. But how would you like to care for this robotic baby instead? 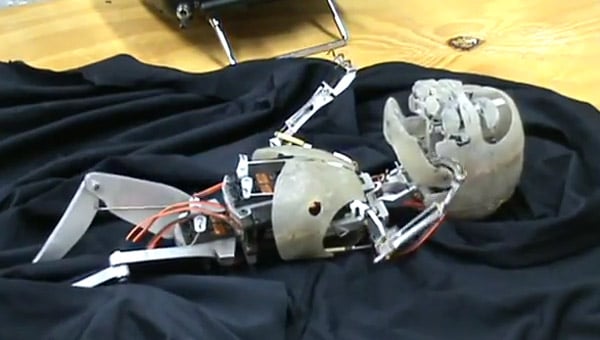 In all seriousness though, this baby is the work of animatronics expert Chris Clarke. Aside from putting together lifelike robotic babies that mimic the movements of a real baby, he was also the special effects guy behind that puppet horse in Steven Spielberg’s War Horse.

This baby was created for use in filming of a soap opera. It looks creepy in the video, but no doubt it might be dressed up in skin and diapers once filming starts. I’m sure most people would find this skinless robotic tot far from adorable or cuddly.

[Fark via IEEE Spectrum via C|Net]