The latest slingshot from Joerg Sprave has turned up and while it’s lacking the zombie (and coconut) crushing power of the last one we talked about with a hammer on the end, the new one is pretty hot. By hot, I really mean hot too. Sprave fitted his new Entropy Slayer 2000 slingshot with its own heater. 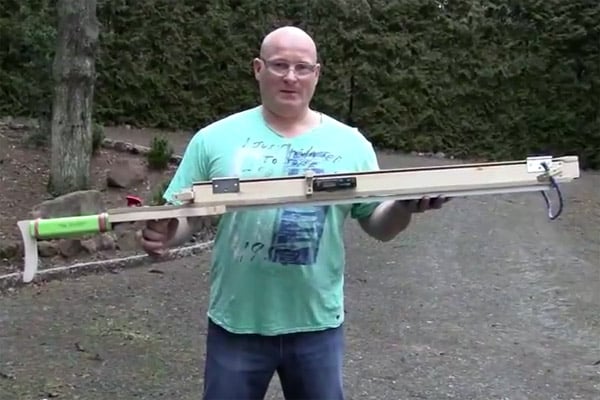 As he shows in his video, as soon as you stretch the rubber band on a slingshot, the band heats up, which gives the slingshot more firing power. Right away the band cools and as the heat leaves, the power declines too. The problem is if you want to have your slingshot loaded and ready to fire you end up losing power. The answer to the problem of losing that power is to apply heat.

Sprave took a heating element and encapsulated it and the rubber bands in an enclosure that traps the heat and keeps the bands nice and warm for firing. This way when he stretches the bands, he can heat them up for maximum power. The heater is powered by a rechargeable battery and appears to heat quickly. He’s also included an interior/exterior thermometer for optimizing the temperature.

It would be interesting to see what would happen if Joerg heated up the rubber bands on some of his more destructive creations like the circular saw slingshot or the slingshot cannon.