Remote Play – a feature that allows wireless access to the PS3 via a PSP or PS Vita – has yet to take off and is only compatible with a handful of PS3 games. We’ve already seen one man make a custom device that does just that with any PS3 game. Now a YouTuber has uploaded video showing a PS Vita streaming PS3 games from a jailbroken PS3. 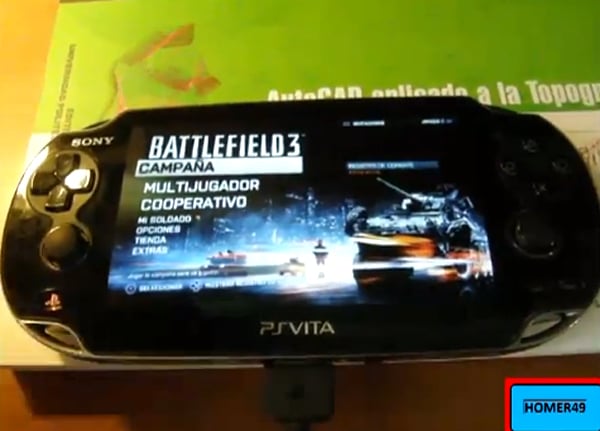 The videos were uploaded by YouTuber homer49. In the video below he demos the hack using Battlefield 3. One neat feature of the hack is that lets the user map the L2, R2, L3 and R3 buttons to the rear touch panels. That’s great news because it means all controls are accounted for – something that wasn’t possible with the PSP – making an official version of this feature much more possible.

That said, homer49 says that you can’t access a PS3 game’s online features when streaming to the PS Vita. There is also a very noticeable lag between button presses. Combine the two and this hack is all but pointless for a huge number of games. Then again, this is an unofficial implementation. Who knows what Sony and video game developers could come up with if they set their minds to it.

In the video below, homer49 explains how the hack works. Unfortunately it’s in Spanish so I can’t tell you exactly what he said – and that annoying creaking sound in the background doesn’t help – but he did say in the description that it requires the custom firmware version 3.55 or 3.41 for the PS3 and a jailbreak program called Multiman. You’ll then have to register the PS Vita on the PS3 as a mobile phone in order to connect it.

I am really hoping that Sony would release an official version of this hack, but there are a number of reasons why they might not do it. Aside from the lag, functionality and power management issues, there’s the issue of cannibalization. If this feature was made official some gamers might opt not to buy PS Vita games and use the handheld primarily to stream from the PS3 instead. Why buy NBA 2K13 for the PS Vita if you can stream the console version?

On the other hand, if the PS Vita had a feature like this when it launched, I’m sure it would be flying off the shelves for years. Skyrim on the toilet? Shut up and take my money! Then when the PS Vita games arrive some of those who bought the handheld for streaming will still end up buying those games. Assuming they’re worth buying of course. I also doubt this feature would work via 3G – homer49 was streaming via Wi-Fi and the lag was still there – so it’s not like gamers can stream games all the time. That’s another reason to buy PS Vita games.

You can speculate with me in the comments, or head to homer49’s channel for more videos of the hack in action.