You’re in the middle of an intense gaming session, talking to each NPC you meet, hoping to stumble upon a line or a glitch that you can turn into a meme, when suddenly your stomach rumbles. What to do? Pause the game, get up and get food? That’s preposterous! How dare I suggest such a rational course of action! What you should do is grumble about video game controllers not having receptacles for food! Grumble no more – Ben Heck’s got your lazy ass covered. 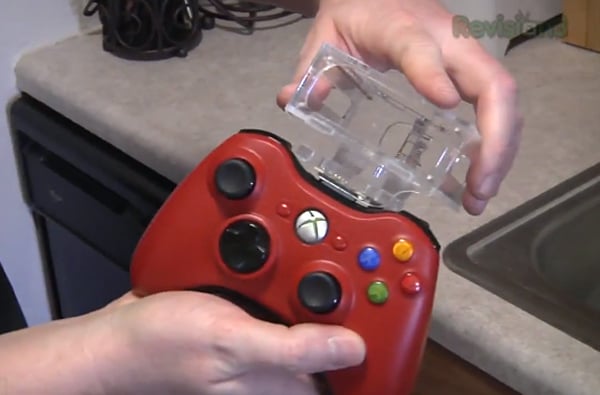 On the latest episode of The Ben Heck Show, the famous modder made a spring-loaded container for Hot Pockets that mounts onto the Charge-and-Play port of an Xbox 360 controller. You could do what he did in the beginning and just duct tape your food on your controller, but this ridiculous invention has one practical feature – its base can be raised so that you can still reach the food easily even as it decreases in height without taking your hands off of the controller.

Initially, Ben tried to make the base electrically-powered by using parts from a Charge-and-Play adapter. But the adapter didn’t provide enough power to do the job, so he settled with the spring-loaded mechanism instead. You can skip to about 13:00 in the video to see the final product:

Combine this with a beer hat and you’re good to go. Go be a personification of the perils of convenience.