Whenever you run out of bullets or shells to take care of those pesky zombies – which we all know are coming one way or the other at some point in time – you need a fall-back weapon. That’s why the DoubleStar Zombie-X AK-47 was specifically designed to accept a battery-charged chainsaw, instead of a laser range-finder. 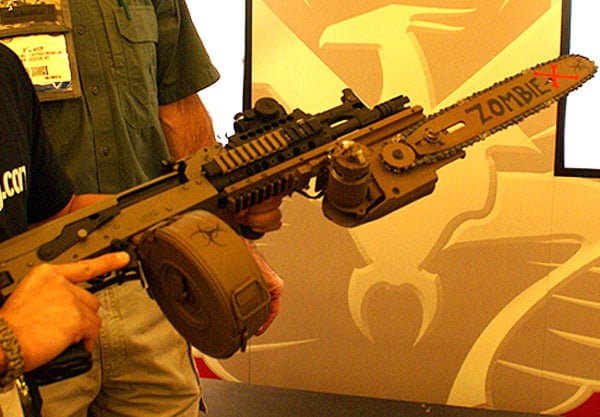 The most frightening thing though is that this is a real attachment for real AK-47s. So if the zombie apocalypse really does happen, then you’d best order yours, just in case. You can match that chainsaw with the EOTech Zombie Stopper XPS2-Z Holographic Sight, which puts a biohazard symbol on your target instead of a red dot.

DoubleStar’s last zombie-themed DSC Zombie Slayer rifle sold for $1,249.99(USD), and this is a lot fancier, so it will be pricier when it’s released.