Bladez Toyz, that British retailer where you can meet all of your R/C helicopter needs, recently decided that it wanted to add Star Wars themed remote control items to its Pump and Play sets. LucasArts, as always, was reluctant to give licensing rights, but after a difficult series of negotiations, Bladez secured the ability to produce these toys. At the 2012 London Toy Fair, they unveiled their new R/C Jumbo Inflatable R2-D2, which will be coming some time late summer / early fall of this year. 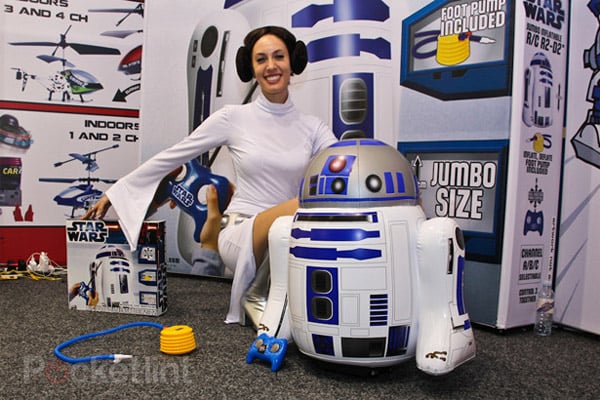 The toy will retail for appx. $63(USD), and is a 26 inch-tall inflatable R2-D2 on wheels. A foot pump is included so that you don’t need to beat your lungs to death to satisfy your child (or yourself.) The Jumbo R2-D2 model is the first of the new Star Wars Pump and Play series – more will be coming later if the droid unit turns out to be a big hit. Now, this is all wonderful, but I need to ask – has anyone already called dibs on the Princess Leia demonstrating the toy? “I did.” *Sulking*

Pump and Play is a term that reminds me of my old days, when I used to shoot hoops with my boys. We’d pump up the ball, go out to the court, and then I would help them play by giving them water when they felt that they were thirsty. Those were good times – hey, if you think you’re falling in love with the Jumbo RC Inflatable R2-D2, you’re going to want to have a look at the R2-D2 Garbage Can and the R2-D2 Apron.