Celebrating the Chinese New Year is a big deal in China. They go all out like it’s Christmas and New Years rolled into one, and millions of Chinese citizens tune-in to watch the Big-Show on TV. This year is the Year of the Dragon, so the show really poured it on with a fully robotic dance troupe. 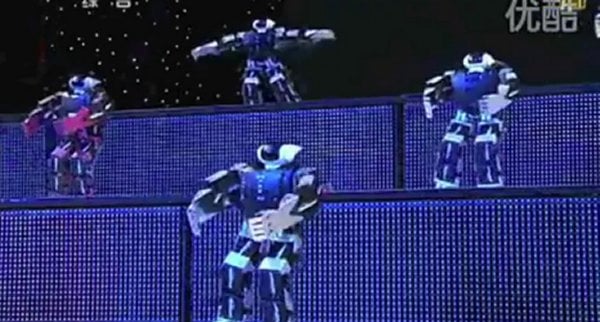 It was a stunning performance. Fourteen robots danced to a re-mix of the Korobushka, a traditional Russian song. You might recognize it from the game Tetris. The highlight of the show was said to be how the robot army entered. The screen behind the stage showed a bunch of ‘bots walking in formation and with each step they took towards the audience a new level of risers popped up with a different part of the robotic troupe.

Robots dancing is always a good way to celebrate anything. Preferably with explosions and flashing lights. What’s truly amazing about this show is the synchronicity that they achieved with these robots all doing crazy moves.