Bumper Sound Finally Figures out How to Stow Your Earbuds

What to do with your earphones when you’re not using them seems to be a problem that’s still in search of a good solution. Sure there are cases and gadgets which let you wrap them around your mobile gadget, but they still take up space, and make it difficult to cram your phone or media player into your pocket, and they still often end up a tangled mess when you undo them. The Bumper Sound concept seems to have solved the problem for good – assuming it ever gets made. 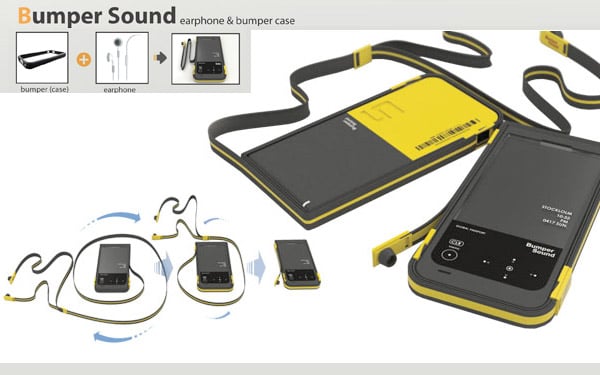 Korean designer Sang Hwa Lee came up with this ingenious concept which turns your headphone cable into a bumper for your gadget when not in use. By using a flat tangle-proof rubber ribbon cable for the headphone cord, they simply wrap around the perimeter of your device when not in use. The three layers of rubber even provide added protection when the cord is stowed. It’s not 100% clear from these images, but it looks like the earbuds themselves would be fairly low profile, and snap into a groove placed on the headphone line itself along the edge of the device.

I’m still not completely sure of how the cable would stay put, but that could probably be achieved by pairing the headphones with a matching case with clips built in to hold it. While it’s definitely not ready for production, the concept seems like it’s on the right track to finally solving this annoying and challenging problem. Kickstarter, anyone?