My Little Pony: Fighting is Magic – Brawler for Bronies

Yesterday we saw a fan made 2D fighter featuring Pokémon. Here’s something that everypony can get behind: another fan-made 2D fighter, this time featuring the characters from the cartoon My Little Pony: Friendship is Magic. 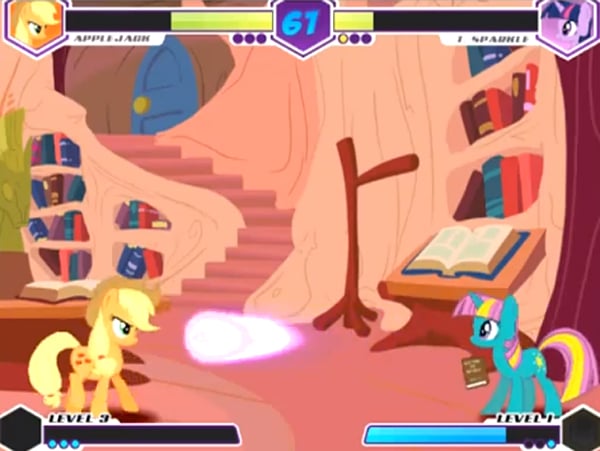 Appropriately named My Little Pony: Fighting is Magic, the game is being made by indie developer Mane6. Gameplay-wise, Fighting is Magic seems similar to the Marvel vs. Capcom series. The ponies have four basic attacks – Light, Medium, Hard and of course Magic. As you’ll see in the gameplay footage below, there are also launchers, aerial combos and high-powered special attacks.

The game is currently in pre-alpha, but have patience. The folks at Mane6 promise that a version of the game will be released soon, featuring lead characters Twilight Sparkle, Rarity, Rainbow Dash, Fluttershy, Applejack and Pinkie Pie, with more characters coming. Fighting is Magic will also have online play, a “lengthy” story mode with boss fights and will be totally free. No “pre-order now to get the Nightmare Moon exclusive” gimmick.