It never ceases to amaze me when I drive somewhere just how many idiot drivers I see reading, texting, and doing anything other than keeping their eyes on the road. The government is trying to combat distracted drivers but what they really need to be doing is combating idiots. There is no legislation that will make an idiot stop being an idiot behind the wheel. This is where sweet car tech like BMWs new prototype highly automated driving mode comes in. 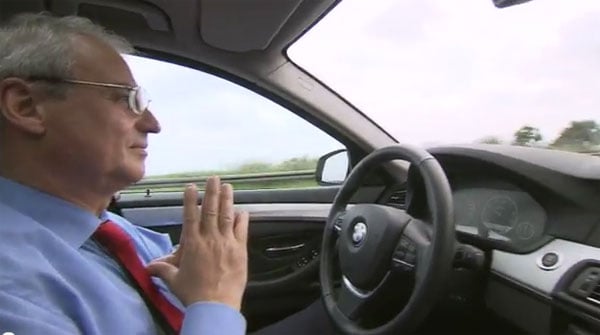 I prefer to be in control of my own car, so I don’t want this kind of stuff to be mandatory, but I vote we come up with some sort of idiot test and should you actually be an idiot you’re would be forced to have a highly-automated motor vehicle. BMWs idea isn’t like the fully-autonomous Google cars that drive with no human interaction, though. With BMW’s system, at any point along the way, you can take control and drive normally, but the car can handle many driving situations all on its own.

Built into a modified BMW Series 5, highly-automated mode is more along the lines of a fancy cruise control system that has radar, sonar, ultrasound, and other sensors built that can recognize when another vehicle is ahead of you and pass the other vehicle safely. The car will also recognize speed limits and not exceed that speed. Check out the video above to see highly-automated mode in action.

At this point, BMW has no plans to commercialize this capability, but will use the learnings from their research to help develop other improvements for vehicle safety systems.