Another First World problem solved! Kohei Matsumura, Daisuke Sakamoto, Masahiko Inami, and Takeo Igarashi of the Japan Science and Technology Agency have invented a pair of earphones with ear buds that can detect if they are on the left or right ear and switch the audio channel if needed. In other words, they’re both left and both right. And always right. Amirite? 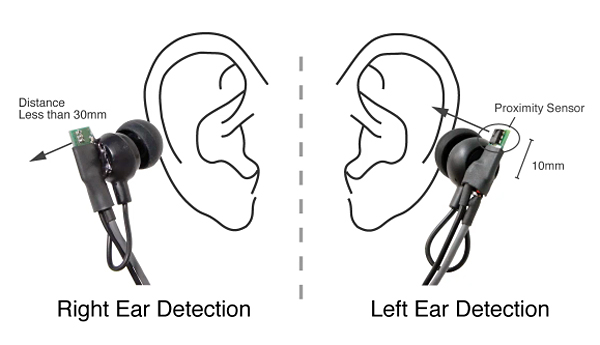 Matsumura and company call their invention the Universal Earphones. Their secret is surprisingly simple and inexpensive – a proximity sensor piggybacked on one of the earbuds. As you can see in the picture above, the sensor faces towards the left ear and away from the right ear. If it detects that it’s about 30mm away from the ear, it means that it’s on the right ear. This input causes the earphones to switch the channels accordingly.

But that’s not all. By running a weak electrical current through the ear buds, the Universal Earphones can also detect if it’s being used by one person or shared by two people. If the current is interrupted it means that the earbuds are on separate heads. The earphones will then pump out a mono mix of the audio being played so the listeners can hear both channels at once. Genius! I suggest you put on your own earphones – correctly, of course – when you watch the video below.

That was awesome, save for the creepy synthesized narrator.