Tim Schafer is one of the most respected developers and creative minds in the video game industry. Unfortunately our world does not transact in respect – Schafer was recently quoted as having pitched a sequel to his critically-acclaimed platformer Psychonauts to publishers, all to no avail. Rock Paper Shotgun then tweeted their own article about Schafer’s plea, saying that all “he needs is a few million dollars.” To which Markus “Notch” Persson, creator of Minecraft, responded via Twitter: 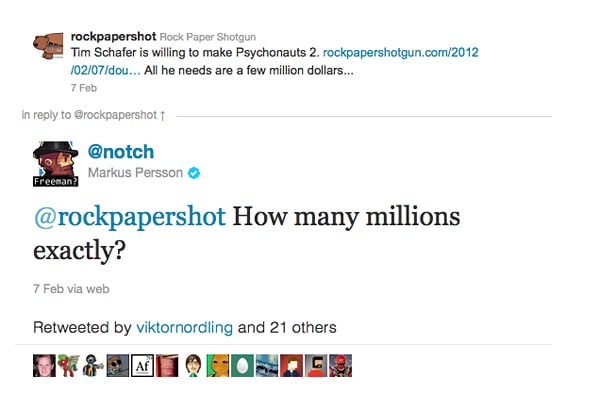 I can not think of a more bad ass question. Forget “Notch” or “Creator of Minecraft“. From now on we should be calling this man Markus “How Many Millions Exactly” Persson, who by the way wasted no time and proceeded to go straight to Tim Schafer himself: 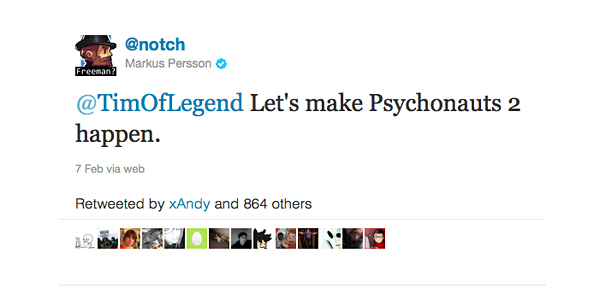 It’s no secret that How Many Millions Exactly’s game is doing extremely well and that his company Mojang has also began publishing third party games. Just to prove how serious he is, he also tweeted: 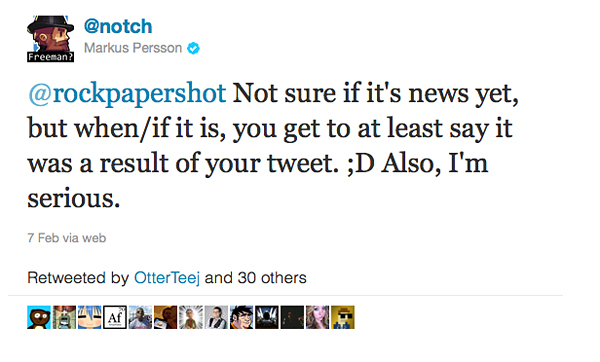 How Many Millions Exactly and Schafer are now exchanging emails – possibly regarding the exactitude of said millions – but Psychonauts fans shouldn’t get their hopes too high just yet. How Many Millions Exactly may have many millions, but that’s not the only thing you need to make a game. I wonder what need I can answer with that question. Probably a researcher looking for the effect of millions of hours of sleep to a person.

It should be noted that Schafer’s company, Double Fine has also recently launched a Kickstarter project to create a totally new point-and-click adventure game – and you can help fund that for as little as $15.