Boston Dynamics‘ LS3 Alpha Dog robot was designed to help American soldiers as a way to carry almost 400 pounds of gear on difficult terrain in the field. Now Alpha Dog is finally ready to enter basic training. That’s because this quadruped robot has some refinement that need to be made before putting it in the field. 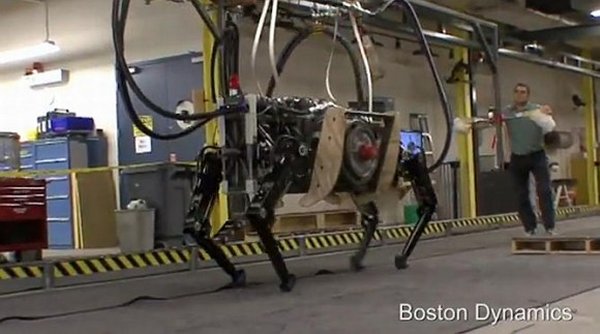 For example, as it is right now, Alpha Dog is really loud. That could give away troops positions to the enemy. This is one area where it could be improved before the live field tests, which are scheduled 18 months from now.

So, from now until then, Boston Dynamics has several goals, like making the robot capable of traveling 20-miles in a 24-hour period without refueling. They will also add voice recognition so that Marines can give audible commands to Alpha Dog. I can’t wait to see what happens when this thing gets even more capable.

[DARPA via IEEE Spectrum via Geek]