I’ll admit that generally I’m not a big fan of most green vehicles such as hybrids or EVs. I don’t have anything against the technology or saving the environment, I just think most of the green vehicles out there are butt-ugly. I will say that Tesla has a history of making some of the few nice-looking electric vehicles such as the Roadster and the Model S. The downside is those vehicles are both very expensive. 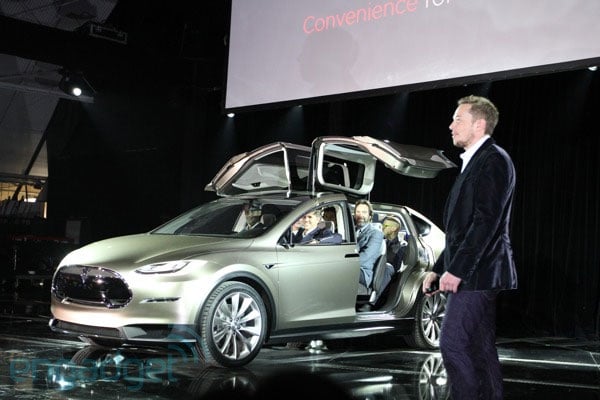 Tesla has unveiled a third model for its all-electric line of cars and it is dubbed the Model X. This new vehicle is actually an SUV that borrows much of the Model S’ drivetrain with tweaks to make it all-wheel-drive. As big as this SUV is, Tesla claims it will scoot from 0 to 60 mph in only 4.4 seconds – impressive for a sports car, let alone an SUV. Especially one that can seat seven.

Anyone that grew up in the 80s will see those gull wing doors on the Model X and immediately think about the DeLorean and Back to the Future. I happen to know for a fact, that the doors on one of those DeLorean’s are very far from friendly in a crowded parking lot. As a kid I watched a local man that owned a DeLorean standing at the grocery store waiting for the person parked next to him to move their car so he could get in his stainless steel ride and drive home. The “falcon-wing” doors on the Model X shouldn’t have that problem; Tesla says they actually need less space to open than conventional doors. They also arc high enough that an adult can stand underneath them.

Production versions of the vehicle won’t arrive until 2014 and when they do hit dealer lots, they should sell for $50,000-$70,000. I would expect the car to have a driving range on a single charge in the 200 to 300 mile range, much like the Tesla Roadster and Model S, though that might go lower when fully loaded with passengers and cargo.

To see the reveal of the Model X for yourself, jump to about 13:30 in the video below: