Touch-based interfaces have generally made it easier for the user to interact with devices, but that’s not the case when it comes to typing. Virtual on-screen keyboards have small keys, provide no tactile feedback and take up a significant amount of the screen. The folks at Teague Labs think they may have a possible alternative – a virtual chorded keyboard. 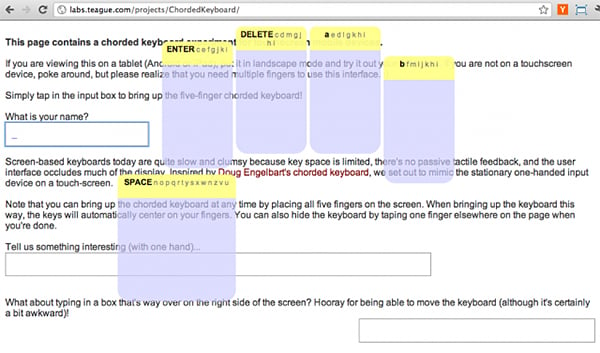 In case you’re not familiar with the device, a chorded keyboard has fewer keys – the user presses multiple keys at once to enter a single command or character. This not only leads to a smaller device but makes it possible to type with one hand. Entering the patterns on such a device is similar to playing chords on a piano, hence the name. This is an example of a chorded keyboard. I’m not sure if the Kee4 Keyboard also qualifies as a chorded keyboard, but it does work in a similar way.

As for Teague Labs’ app, it uses five virtual buttons which appear when the user places all five fingers on the screen. Theoretically, it addresses the three weaknesses of traditional on-screen keyboards. The buttons are large. If you can memorize the patterns for characters, then you don’t need tactile feedback. Finally, the buttons go away when you lift your fingers off of the tablet’s screen; they can also be dragged in another area of the screen. Then again they take up the whole screen while you’re typing. Here’s the app in action:

If you have an iPad or Android tablet, fire up your tablet’s browser and go to this page to try out Teague Labs’ chorded keyboard prototype. Note that the app doesn’t allow for punctuation marks – those will be included in the second set of buttons, which are still in development. It’s a nice concept but I think I’ll stick to the default keyboard on my iPad. I don’t do a lot of typing on it anyway and I’m already looking at the screen when I’m typing so I don’t need to touch type.

What I really want is for Apple to include a numpad-style button, similar to the ones available on older cellphones. Years of owning Nokia phones have burned the memory of that interface to my thumbs. Also, I’m not sure if the guys at Teague Labs are aware of this, but there are already virtual chorded keyboard apps for both the iPad and for Android tablets, although the ones I saw are designed for use with two thumbs.

[Teague Labs via Hack A Day]