You’ve heard of telepresence, where you can attend meetings while not actually there by using a robot proxy, but using a robot proxy to play with Fido is a new one to me. That’s just what Jordan Correa and his wife have done here. They must really love their dog. 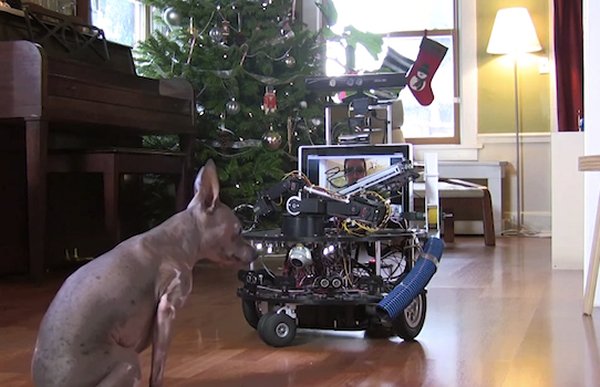 They both work full-time jobs, so they miss their pooch named Darwin. Correa has training in robotics and engineering so naturally he built a telepresence robot surrogate that he could control from work to play with his dog.

It’s called the DarwinBot and it uses a Parallax EDDIE chasis and is programmed with the beta of Microsoft Robotics Developer Studio 4. That makes sense as well because Correa is a developer in Microsoft’s robotics division. It has all of the bells and whistles you would expect from a telepresence bot for dogs, like a treat dispenser, a ball-launching ballista, a ball-retrieving robotic arm, and speakers so Darwin can hear his master’s voice.

He can even interact somewhat naturally with Darwin thanks to the onboard tablet PC, Skype, and a pan-and-tilt webcam. There is also a Kinect camera system on top for obstacle avoidance and a downward-facing webcam for the absolutely necessary ball retrieval. He controls it over the Internet with an XBox 360 controller. Surprisingly, Darwin isn’t freaked out at all by the robot and the mechanical noises it makes. The dog seems to get what is going on and for the most part acts naturally as if he is with his master.

[via Neatorama via Geekosystem]