Concept cars are a strange breed when we see them at major car shows. Sometimes they can be pure flights of fancy, and other times they can be clear hints at what future vehicles will look like. A new concept car that isn’t from any of the major automakers has turned up, imagined by industrial designer Tiago Miguel Inacio. The car has some wildly-speculative features, but it looks pretty neat on the outside. 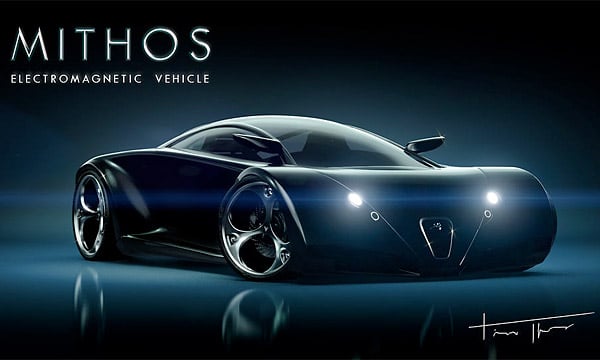 The car is called the Mithos and it is apparently modeled in part on the rather cheesy Tim Burton version of the Batmobile. I see more hints of modern supercars in the design rather than the Batmobile, personally. The designer talks about some wild specs such as “Q-teleportation” and another called “quantum boost” which is some type of hovering technology for future electromagnetic highways.

According to its designer, the Mithos would use a 1.5 Megawatt, zero-emission electric engine have a top speed of 247 mph. It would even automatically be recharged by wireless charging stations. I certainly like the idea of the scratch-resistant body panels that remember their shape and return to normal if you have an accident. While all of these features seem pretty outlandish, at least some of them echo actual technology that’s being researched and developed these days. But I still doubt you’ll ever see these features on a production car. Check out the video above to find out more about the Mithos.