PowerUSB Power Strip Lets You Control Outlets with Your PC

Power strips that turn on or off when you turn your computer on or off aren’t new. These things have been around for several years now and they’re good for saving power for people that like to be green. A new power strip has launched called the PowerUSB Basic and it takes the general concept of the USB controlled power strip and cranks it up a notch or two. 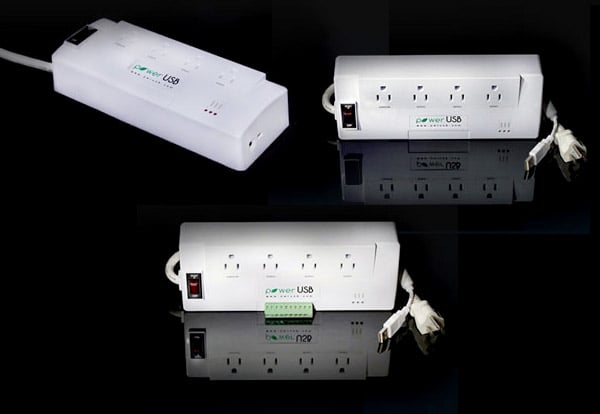 The PowerUSB has three outlets to turn off your accessories when your computer power goes off. A fourth outlet is on all the time for the computer. The value-add for this particular power strip comes in that you can set the outlets to stay off all the time unless specific things happen. What that means is you can tell the strip to leave the outlet where your printer is connected off until a print job is needed. In addition, you can use the software to switch connected lights and fans on and off if you’d like.

With these programmable conditions available, this strip will save a lot more power than your average simple on-off device. I also think it would be cool if you could leave your speakers off until audio was playing – but I’m not sure if you can do that with the included software.

The PowerUSB Basic needs a single USB connection to your computer and a wall outlet to operate. There’s also an advanced Digital I/O version, which lets you use external electrical triggers to turn outlets on or off. Prices start at $69.99(USD) for the Basic and $89.99 for the Digital I/O version.