I’ve always been a fan of Monty Python, but more recently, I’m an even bigger fan of The Walking Dead. As a matter of fact, the new episode is starting right now, and I have to get to the DVR to un-pause and start watching it as soon as I’m done writing this. So when I saw this art which mashes up both Python and Walking Dead, I had a major nerdgasm. 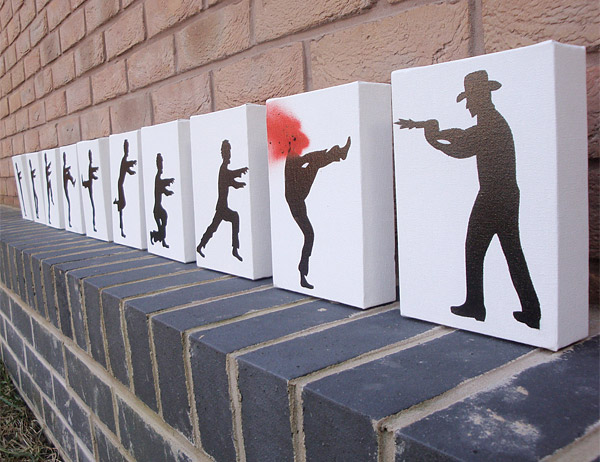 Inspired by an original graphic design by Teo Zirinis, The Ministry of Silly Walking Dead needs to go above my fireplace mantle now. It’s made up from 10 individual 7″ x 5″ canvases, nine of which have zombies walking along doing their best John Cleese impression, while the tenth one has Rick Grimes taking aim and blowing away zombie number nine. Shane is nowhere to be seen – probably because he already sacrificed a civilian to make his escape.

This limited-edition set is hand-stenciled by UK artist Rob Marchant of RAMART, and sells for £75 (~$122 USD). Whether you’re a Python or Dead fan, you should swing by Etsy and check it out now. If you like the idea, but are too cheap to buy the canvas version, then grab Teo’s original design on a T-shirt over at RedBubble for about $22.