Last week we told you about a kick-ass homemade Airsoft machine gun. Well, now it is even simpler to make. Cheaper too, at just $4. In a follow up to the original video, two upgrades have now been added to the DIY gun, for those who don’t have an air compressor or just want their machine gun to be portable. 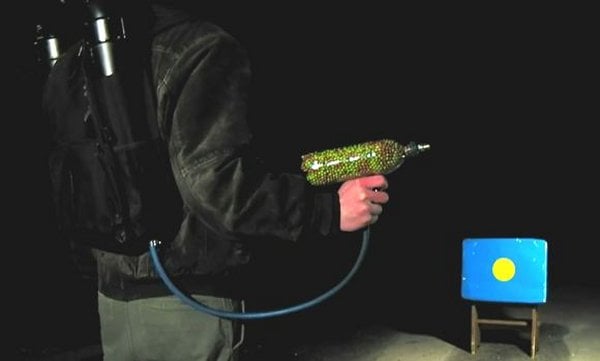 And who wouldn’t want a portable Airsoft machine gun? The first variant makes the original Airsoft gun totally manual. It just requires the soda bottle and the brake line. You won’t have to cut a hole in the bottle, just the cap. This gun will fire 5-10 pellets at a time, simply by squeezing the plastic bottle with a good grip.

The second variant is for those who want a portable, rapid-fire weapon, and it will allow you to hook it up to a backpack. This one costs more than the origina version, but you don’t need an air compressor since the tubes in the backpack can be filled with a bicycle pump. Pretty clever.

Always remember when playing with this sort of stuff, safety comes first.